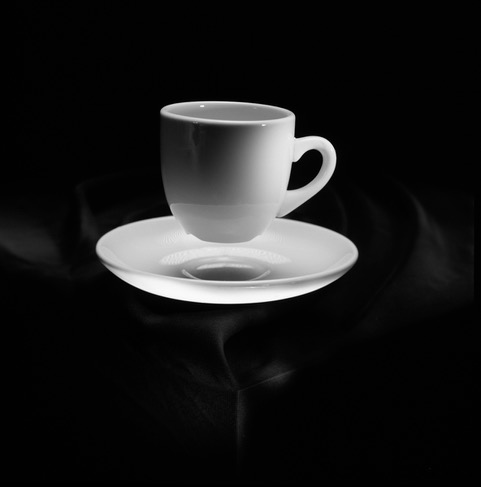 Summer of 1990, a coffeehouse in Los Angeles.
I observed people engaged in conversation over their coffee.  At a corner table by the window, the people left and there was a single coffee cup and some wet cup rings around it.  Drawn by the light, I photographed it.  I noticed other empty tables with cups and began to imagine the conversations and community shared over this left-behind evidence of recent humanity. I began to visit other coffeehouses seeking tables of empty cups with the people gone, and to photograph the coffee cups as I found them.  There is no plan other than randomness and no pattern except for how those now-absent coffee-drinkers left their cups, yet the coffee cups resonate with the thoughts and desires of people now absent from the scene.  Twenty-five years later I still photograph coffee cups wherever my travels take me.

I was at a koffie haus in Delft, Netherlands this cup I was sipping out of whispered: Take me with you. Without hesitation, the cup saucer and spoon went into my pocket.  The cup, which I now think of as the cup, travels with me everyday, wherever I am in the world.  I may not photograph it everyday but it is always close by. I also photograph coffee cups left behind around the world as I find them: left alone and random unlike photographing the cup which is all about control and placement.

Cups and the Cup.
The photography of coffee cups has always relied on available light and the position that I find them in. Photography of The Cup is all about control, placement, and manipulating light.  The cups and The Cup have made me aware of the constant seeking of personal and artistic equilibrium.  When I photograph them, I am seeking, and sometimes finding, my own balance.
More information:fotographzfrankjackson.tumblr.com
instagram: fotographz